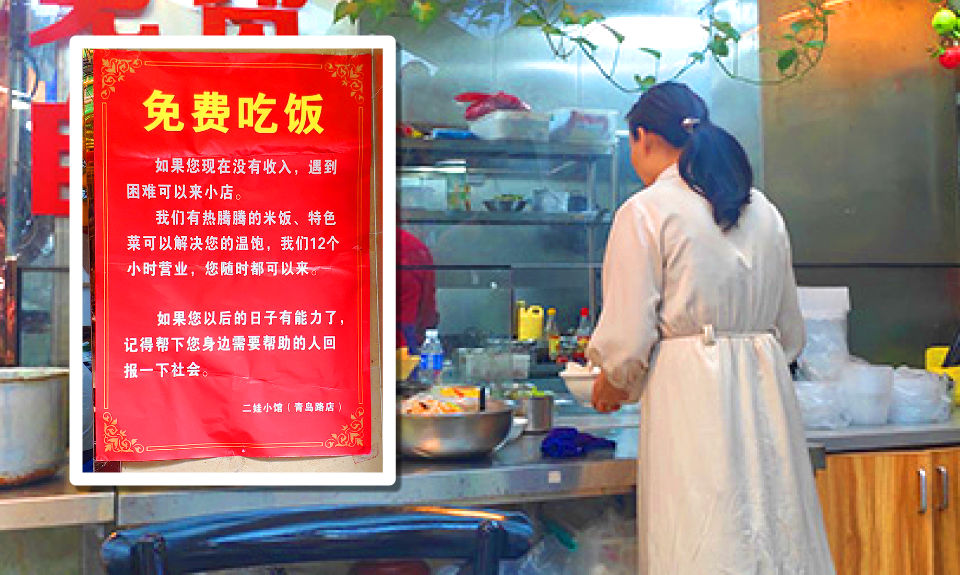 Giving Back; “Love Meal” Provider in Nanjing Seeks No Publicity 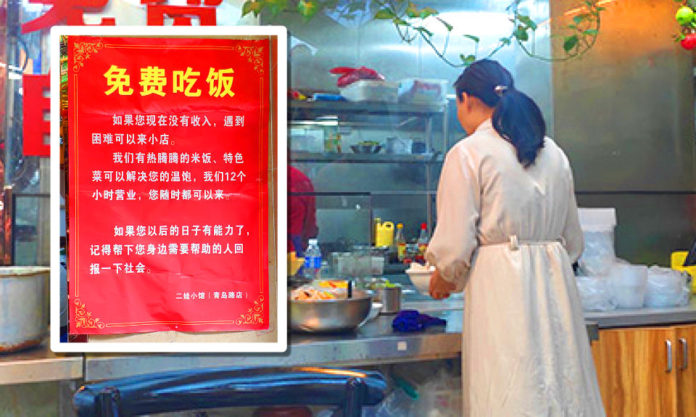 Lan Ganmei prepares her "Love Meals" in her Qingdao Lu restaurant in Nanjing. Inset; the sign posted outside the eatery offering meals to those in need. Images courtesy The Paper

The owner of a run-of-the-mill restaurant in Nanjing has found herself in the headlines after seeking to avoid just that, all the while continuing her act of kindness to give out free meals to the penniless and others in need.

It all began in 1992, when Lan Ganmei (兰乾美) injured her foot while working her first job as a cook in a restaurant in Chongqing. With no choice but to continue working, she stood on the pained foot day in, day out, putting several 30-cm-wide stools together to sleep the nights. That was also the year she came to Nanjing for the first time.

She was sent to a hospital not far from the old Xiaguan Police Station in Gulou District, where a doctor, surnamed Liu, put 14 stitches in her foot and changed her dressing for 10 consecutive days. Liu did not charge Lan a single “fen”.

Fast forward 27 years to October of last year, to when Lan, who manages the Qingdao Lu branch of “Erwa Xiaoguan” (二娃小馆), one of six in Nanjing, hung up a sign in front of the restaurant that said simply, “Free Meals”.

Nicknamed “love meals”, Lan serves up for the needy pickled fish, stir-fried beancurd in chili sauce and seaweed-egg soup. Providing love meals to those in need is her way of giving back to the city; in her opinion, not really something worthy of publicity.

“I hope that we can give free meals to families who have been bankrupt by children’s hospitals for medical treatment, migrant workers with next to no savings, etc. These people really don’t even have money to eat”, Lan told The Paper.

When her restaurant reopened after the coronavirus-induced 2-month closure earlier this year, Lan was facing losses of ¥40,000, despite a 1-month deduction in rent from the landlord.

But Lan continued to offer her love meals.

Recently, her long-term benevolence has caught the attention of local media. Lan told reporters that she had seen an uptick in needy customers since the epidemic, implying that her love meals are needed now more than ever.

Talk about her original intention to help others and Lan will say that it was Liu, when she was just 19, that probably affected her the most. “Dr. Liu from Nanjing is the one who influenced my life”, she said.

If Lan has used her new-found fame for any purpose, it is to help her find her benefactor.